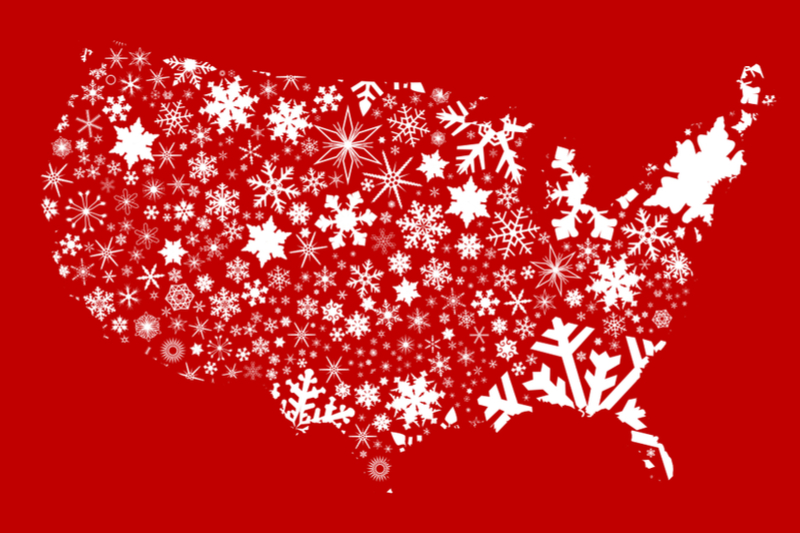 Are all your Christmas packages shipped out?

What about all those last minute buyers who are still browsing your site? Them that frantically try to pick a present for the relative they forgot about till now.

Or if you’re one of those last minute people reading this, yes, you certainly should panic a little. Especially if you had forgotten and speed ordered your kid’s present. Grab your boots. Physical shopping ain’t that bad.

Christmas is less than a week away, and packages meant for the occasion need to get there on time. No matter what.

On going through the data accumulated since the beginning of this holiday season, we realised there were specific areas bound to experience more delays than the rest.

Areas where delivery congestions were happening more often than not.

What if your business was shipping to that area in the last minute? Then your package is definitely not reaching the customer on time.

That’s where data comes handy. What you’ll find below are a categorized list of areas that have consistently faced delays or other delivery exceptions since the holiday season began (November 26, 2018- December 20, 2018).

If you’re shipping out to any of these areas, then you better be on the lookout. Your package may not make it to its destination on time.

So which states are hotspots for the most number of delays? Where would you need to carefully monitor your packages?

Of all the states in the US, the following have witnessed the most number of delays for FedEx shipments. 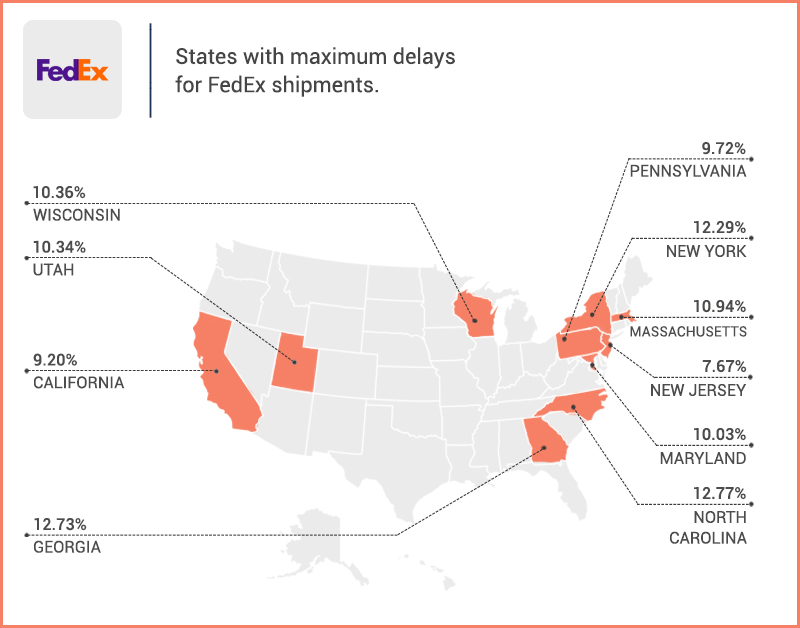 As you can see, states like New York, North Carolina, Georgia, Wisconsin, Utah, Massachusetts and Maryland sported the highest recorded number of delays ranging from 10%-12%.

For UPS shipments, the following states saw a high rate of delays. 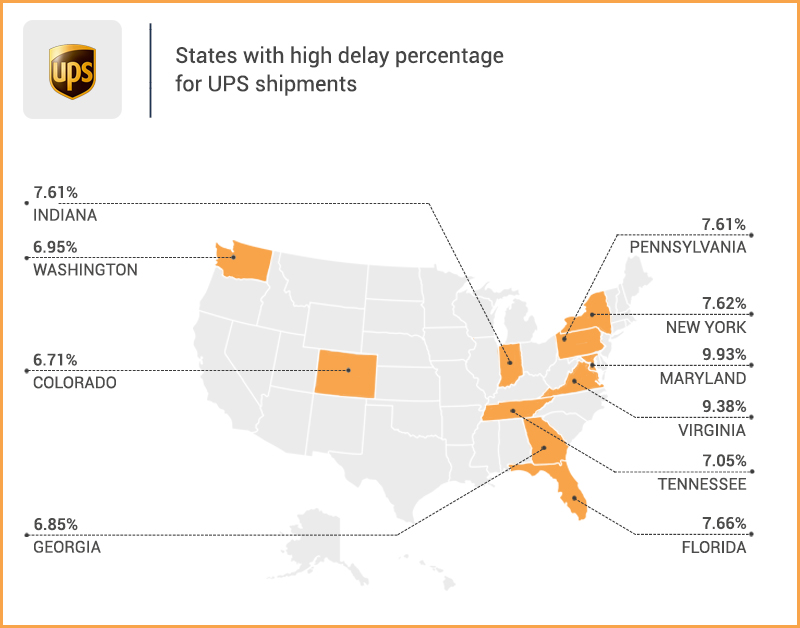 With UPS, the highest delay percentage ranged from 7% to 9%, which shows a noticeably better performance that FedEx so far. States with the highest number of delays include Indiana, Pennsylvania, New York, Maryland, Virginia, Tennessee and Florida.

States like New York, Maryland, Pennsylvania and Georgia have faced a considerable number of delays with both FedEx and UPS shipments.

On close inspection, you can see how a majority of these states are densely populated.

Let’s get down to cities.

Where would you have to guard your package and keep replacements ready for high risk zones?

Here’s the top seven you need to watch out for.

Looking at specific cities, Miami, Los Angeles and Denver faced the most number of delays at 8-9% while shipping with UPS. 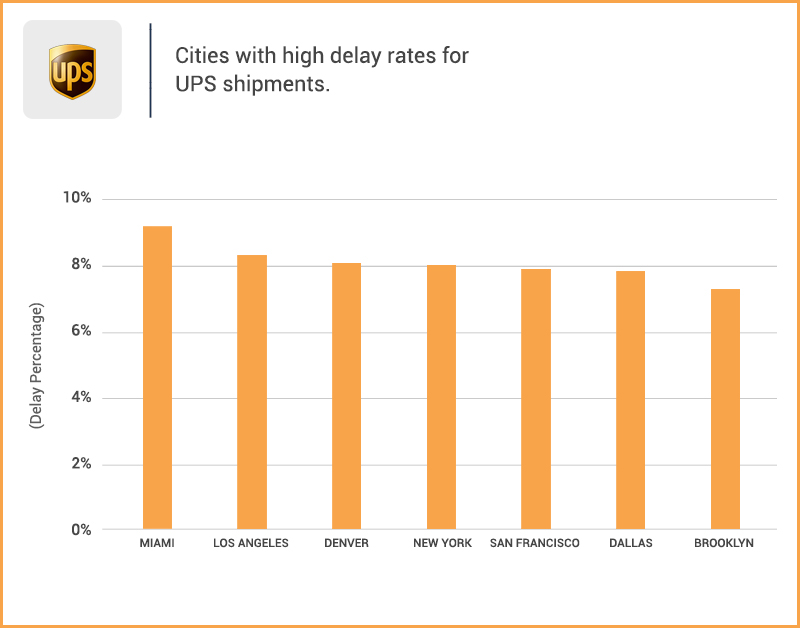 For FedEx shipments, the cities with markedly higher delay rates include Washington, Salt Lake City and New York with delay percentages of 11%. 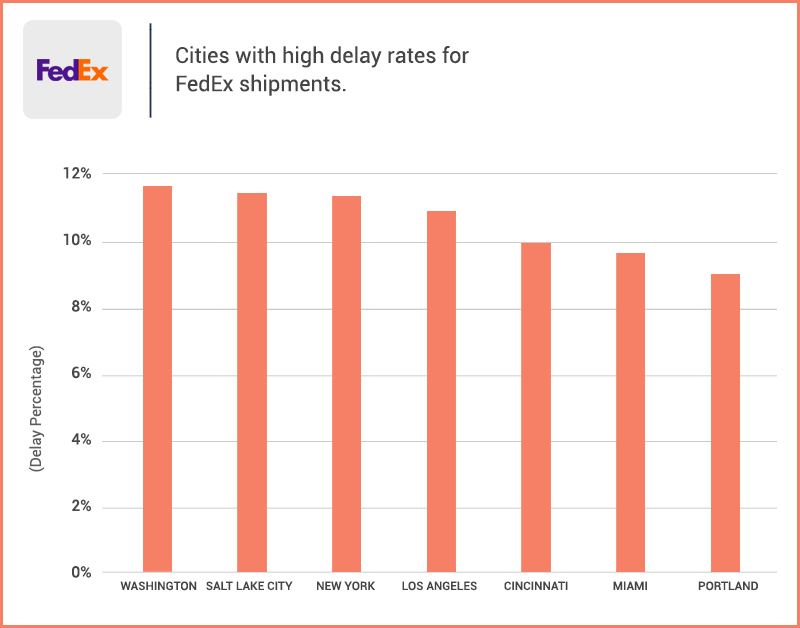 As of now, UPS seems to be on the fast track this holiday season, delivering better performance than FedEx in most parts of the US.

If you would like more insight on understanding and overcoming delivery congestions this holiday season, you can read here.

For more predictions on holiday specific shipping, here you go.

In case your current shipping strategy is more of a pain than a well oiled machine, we’ve got you covered on that front too.

Retailers and shoppers alike need to be aware of these areas that face high congestions during Christmas time so that nobody gets disappointed when a package doesn’t turn up.

Go on ahead and make alternate arrangements well in advance folks!

May the force be with your package.